Stephen Williams, one of ZM’s honorary representatives,
comments on a recent return visit to Malawi

What takes five hours and involves three bicycles covered in foliage; getting dressed up; a dancing procession and lots of lavish gifts? A night out in downtown Blantyre? . No. A celebrity “Get-Me-Out-Of-Here” show on Malawian network TV? . No.

The induction of a new Pastor in the Zambesi Evangelical Church? … Yes.

It seems we might not be giving our Church leaders the full treatment in the UK. Here, in Malawi, under a blazing sun a congregation of 300 church members and guests at Manjawira ZEC sang and danced for two hours before ‘abducting’ the abusa (pastor) and his wife and taking them to their home in an overloaded cavalcade of weaving vehicles (nothing to do with the cavernous potholes in a dirt track) where they were dressed up in newly donated clothes. It’s a matter of some importance to have a well-dressed pastor in Malawi and as most can’t afford to visit Savile Row they are given clothes or material for the occasion. The returning carnival led by the foliage-draped bicycles and an ever growing procession whooped and rejoiced all the way back to the outdoors Church meeting point where a pre-arranged shower party took things to the next level of exuberance. The congregation took it in turn to advance on the abusa and his wife and exuberantly provide them with lavish gifts. In most cases congregations find it difficult to provide financial support for their pastors so this is something of an advance on his stipend.

Then things regained a more formal aspect. Vows were exchanged, speeches were made and a sermon preached. After which normal service (quite literally) was restored and singing and dancing erupted with even greater energy. Five hours later, following a mass bring and share lunch, some reluctantly people exchanged farewells before heading off on the 10 kilometre walk home.

Yes, they do things differently in Malawi or, at least, things take longer – and are always accomplished with a smile. And, a lot is happening. Returning to Malawi after an interval of three years highlights both what has been achieved and what is new. On this occasion it was good to meet the latest cohort of students at the Evangelical Bible College of Malawi and to recognise their calling and commitment to serve the Church and support outreach programmes. Likewise, it was encouraging to meet those serving with Children for Christ Ministries who are actively and effectively engaged in training those involved in working with children in schools and youth groups. 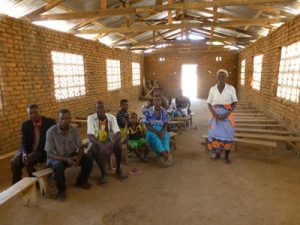 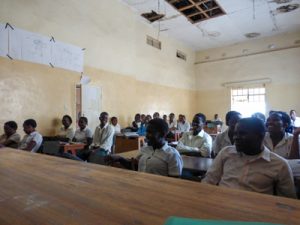 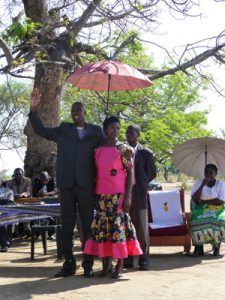 The Pastor and his wife returning to the ceremony after receiving his ‘new’ clothes. 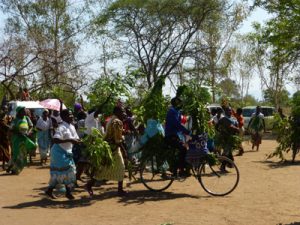 Decorated bicycles at the pastor’s induction

I have attended a few prize giving ceremonies in my time but never, until this visit, have I been a guest of honour at a goat presentation! This particularly moving occasion was the more poignant because the life changing significance of the gift was clearly communicated through the effusive speeches and exuberant celebrations. Each family in this community, caught up in last year’s devastating floods in the South Shire region, can now anticipate up to twice the annual income through careful management of a breeding programme. Similar initiatives have generated sufficient surplus to pay school / university fees, thus extending the life chances of a rising generation and the greater potential to care for the extended family.

If like me you have wondered why congregations in Malawi and Mozambique place such emphasis on roofing their church premises with iron sheets then picture the scene at Siki River of Life Evangelical Church. Here we heard graphic accounts of what it is like to sit through a service under a thatched roof during the rainy season, constantly shifting along bench seats to escape the deluge. Cancellation or going home early is not an option! In contrast, image the same congregation, men, women and children collecting a donated consignment of iron sheets from the “local” supplier and carrying them, head high, for 10 km to the accompaniment of ululation and dancing. Now they meet uninterrupted year round in relative comfort welcoming friends and neighbours intrigued by what is going on.

Finally, what’s new? Detailed conversations with the General Secretary and other leaders of the Zambesi Evangelical Church (ZEC) put the spotlight on Education. ZEC has a history of involvement in setting up schools which, following Malawi’s independence in 1964, came under more direct government control. Today, the Church still has a presence and influence in some of these schools and is setting up other independent schools offering education underpinned by a clear Christian ethos. Church leaders are seeking to develop a renewed vision for the development of Christian education recognising the significance of this in growth of the church and the development of the nation.

So, yes, they do things differently in Malawi and Mozambique and that’s the point. Zambesi Mission does not seek to introduce or impose its ways of doing things. It does not set up and manage projects or place conditions or constraints on the leadership of the church. Instead, it works in partnership to support what God is doing through the national and local church. Surely, the right approach and one which means we learn much from one another.