Rose Chirwa, the zm Projects Officer in Malawi, writes about some of the ministries with which she has been involved during recent months.

Food for the hungry

Last year, after the devastating floods of 2015, some parts of Malawi experienced drought; the Zambesi Evangelical Church was not spared and most of its members in the southern part of the country were affected by the drought. Many people had harvested little or nothing.

With funding from our beloved brothers and sisters from zm in the United Kingdom, we managed to buy 1300 bags of maize and 1278 bags which were delivered to various drop- off points scheduled by ZEC Synod office.

In January 2017 we planned to start the maize distribution exercise to various ZEC drop off points but before that I met with Myles, zm’s Church Development partner, and the ZEC leaders to discuss how we could best deliver the relief maize to the most affected ZEC Churches especially those in the southern region.

The delivery started on 18th January with some challenges, of course, especially in the afternoon when it was raining but we managed to deliver all the bags of maize and the first drop off points were Mitsidi and Limbe for all the churches in Mitsidi and Blantyre quarterly.

We had planned to finish delivery of all the relief maize before the end of January and by 26th January we managed to deliver to all the scheduled drop off points. The pictures show some of the various drop off points. Our last delivery point was along the Mangochi to Nsanama road. 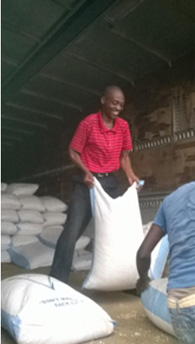 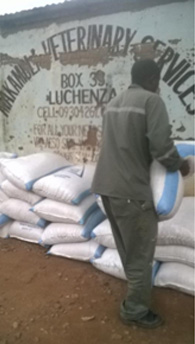 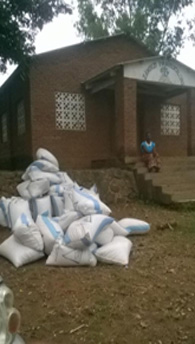 Clothes for the Babies

In June last year we visited Queen Elizabeth Hospital to give a donation of Baby clothes to Kangaroo Ward. The Ward deals with premature babies and most of them come from rural areas with no proper clothes to cover their babies. We also gave a donation to the paediatric ward, post natal ward and antenatal ward. Thank you to the ladies who spend their time knitting baby clothes and blankets. May God should continue to bless them.

Whenever I visit ZEC rural health centres and Orphan Day Care centres I carry with me some clothes to donate for the babies. All this exercise happened in cold season and this was last year when I went to buy rice for all the ODCs.

Training for the Leaders

I also had the privilege of attending the graduation ceremony at the Evangelical Bible College of Malawi last July. It was a thrill to see the students sponsored by zm friends preparing to go out into ministry.

Below are some of the students at EBCOM who graduated on 1st July 2016, thank God for the supporters.

In July 2016 we had two book set conferences for which I was responsible for buying and delivering books and other stationary. I helped in compiling the sets of 9 to 14 books including the Bible which the participants received at the end of each conference. At one point I also helped in facilitating the group discussions .The two book set conferences were held in Ntcheu, at the Assemblies of God Church and in Mangochi at the ZEC Church.

A week after the Ntcheu conference we went to Mangochi where I was responsible for all the logistics, photocopying, arranging books for participants.

Pastor Emmanuel Akau for Cavarly Ministries who has served for many years in Mangochi preached the good news about the Lord Jesus Christ. Many Muslims have come to the Lord after hearing to his teachings. He is from Northern Nigeria where Muslims are in the majority. Pastor Akau has a back ground history on how Islam spread and knows the strategies used by Muslims to win many people to Islam.

Among the conference participants we had many Pastors who were converted from Islam to Christianity.

During lunch time I came across torn Bibles for some of the Pastors who came to the conference with some pages missing. One had threads all over to keep it intact, so the books set given to them after the conference were precious gifts. Now they could now use a full Bible with all the pages intact.